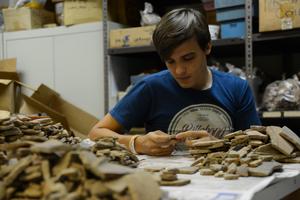 As Panama City turns 500, Jean-Sébastien Pourcelot class of 2007 helps tell part of Panama's colonial history
Where and what did you go on to study after finishing at ISP?
For my bachelor’s degree I went to the University of British Columbia, Canada and majored in anthropology and Latin American studies, and I just recently obtained a masters in historical archaeology at the University of Massachusetts, Boston.
Did you pursue the IB diploma or certificates? How do you feel this helped prepare
you for the next step? How did it help you be successful?
I pursued four IB certificates and I can genuinely affirm that, apart from the knowledge that I gained in various topics in history, literature, and math, their obtention were undeniably beneficial for me moving forward. On the one hand, I found that the workload in some my IB and freshman year courses in college was comparable, so unknowingly I had been preparing myself to perform at a high level of demand in the last two years of high school
which made the transition to university feel less traumatic.
In addition, my university validated two of my IB certificates as university credits that fulfilled most of the basic degree requirements (which were not related to the majors I was pursuing). This meant that I started college with 12 credits in the bag and, instead of having to sit in a literature or Spanish class that I was not interested in, I was able to dive right into courses that were more related to my majors from the onset and by the time I graduated I
had taken more anthropology classes than most of my classmates.
What is your fondest memory or what was the most rewarding about your ISP
experience?
ISP’s diverse student body gave me the unique opportunity to surround myself with people coming from very different cultural backgrounds from a young age which helped me develop an awareness of how heterogenous the world is. Experiencing this on a daily basis definitively helped me become open-minded and understanding of different customs and ways of being. And as for the memories, although there are a lot of moments from my time at ISP that I still cherish, some of the best include my experience as part of AASCA’s volleyball team and the intermural indoor soccer leagues which were a lot of fun to both watch and play in.
Can you tell me about what you do as an archeologist in Panama? Did ISP help you
discover that passion? Did you acquire any skills that help you in what you do as a
professional?
In a nutshell, I study various aspects of Panama’s past using the material remains or objects that those who have been here before us left behind either several hundred or thousands of years ago. I believe that this definition is what is most commonly associated with the archaeologist’s task which is basically to convert the findings we uncover in excavations into information that can contribute to a better understanding of past cultures. Since graduating in 2011, I’ve participated in multiple projects in some of the more renowned sites such as Panama la Vieja and Casco Antiguo as well as in more remote areas including in the Rio Indio watershed and in the Chagres National Park.
Funny enough, the moment I decided that I wanted to become an archaeologist happened in an ISP classroom in the 10th grade (more specifically in Ms. Franco’s Panamanian Studies). I distinctively remember opening the course’s history book and noticing, to my surprise, that the more than 10,000 years of Pre-Colombian history in Panama had been (badly) synthesized in just two pages, and I decided that I wanted to contribute to change
that.
How did you celebrate Panama's 500 years?
Although I was not part of the organizing committee, I did participate in a couple of activities
that were organized as part of the celebrations such as the Panamanian Anthropology and
History Congress where I moderated a symposium and presented the results of my latest
research on ceramic production at Panama la Vieja during the Colonial period (the city was,
by the way, an important ceramic production center during the 16th century from which
locally-produced vessels were exported as far away as present-day Chile!).
Are you an ISP Alumni? Tell us your story! Help us connect with Alumni around the world and strengthen our network. Join our Alumni Network on LikedIn by adding ISP's Official Page to your education history.