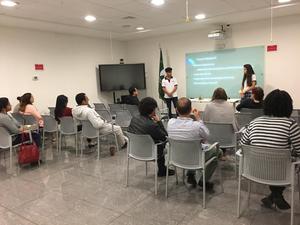 After creating a prototype for a glove that helps reduce the shaking of the hands in people suffering from Parkinson’s Disease for the ISP Science & Engineering Fair last year, Lucas and Giselle recently presented at Panama’s Science and Technology Research Institute INDICASAT.

We had the chance to catch up with them to learn more about their project and their plans for the future.


Can you tell us where this idea came from? What inspired you to take on this challenge?


G: Last year I was doing some research on the internet and I found a video of something called Project Emma, which is a bracelet created for Emma, who suffers from Parkinson’s Disease, that helps her control the tremors and shaking in her hands. This is achieved using motors that produce vibration to counter the shaking and achieve balance. And then one day in Chemistry class when we were thinking of a project for the fair, I remembered the video and decided to start the project.


L: We were in Mr. Patrick's class and he was explaining to us that we could get extra credit by presenting a project at the science fair ISP was hosting that year. This was part of the class either way, but both of us wanted some extra credit. So we began to discuss the idea and researching more about Project Emma and Parkinson's Disease, and we realized that what worked for Emma wouldn't necessarily work for others. So we set out to create a more universal glove using a gyroscope and gimbal to achieve stability and balance to counteract the shaking and tremors.


How does the prototype glove work?


L: The glove works using a gyroscope which in simple terms is a ring that revolves around its axis at a very high speed, as the apparatus spins it counteracts the forces of the shaking and tremors to balance and stabilize the person's movements.


G: We consulted a physicist through Lucas’ Dad. He explained all of the specifics of how the gyroscope works to balance forces and eliminate the shaking caused by Parkinson's tremors.


L: My dad helped us meet up with the physicist, who like Giselle said, explained the physics theory behind how the apparatus works. Without that help, I don't think we would have been able to produce a prototype in such a short time.  It was thanks to this extra help that we were able to learn so quickly and design the prototype.


The first days we did the research and figured out all of the science engineering and physics behind how the glove works. Then we went on to create the prototype using scraps from the Vex Robotics team thanks to Mr. Rios. On the last day, we were still fixing the design and tweaking it in the car on the way to testing it with some patients suffering from Parkinson’s.  We were able to test on these subjects thanks to the support we got from the President of Panama’s Parkinson’s Association. We stayed up late to prepare our presentation for the fair the next day.


G: After the fair, the visiting judges from INDICASAT who were at the fair contacted Doctor Barratt to offer us an internship. Yesterday we presented our prototype in a seminar at INDICASAT, and we got to meet a lot of people and make some important connections for future collaboration so we can keep improving our prototype.


L: Our presentation went well. Instead of having people sit and listen to us we started with an engagement activity, asking them what they thought we were going to show them and how it worked. This made the talk more engaging and I think they will remember us. It was awkward at first, but as we progressed they seemed to understand more and more. In a way, we were showing them the way we learn at ISP.


What's the most rewarding part of this experience and where do you go from here?


G: The most rewarding part for me is that Parkinson’s does not have a cure. Many people have to take medications and undergo treatments at a very high cost. My great grandmother suffered from this disease and I can remember being three years old and asking why she was shaking and her explaining that it was something she could not control.  So when we tested the prototype with people living with Parkinson’s it was amazing and emotional to see it working. If we were able to accomplish this in such a short time and as students I can't imagine what we will be able to accomplish in the future.


L: I would say the same for me, helping people was the most rewarding part of this experience. Sometimes I don't think people really consider how impactful Parkinsons is, the shaking and tremors limit people’s ability to do day to day tasks, and this limits their independence. As they go through the five stages and are further debilitated by the disease they become less independent. Creating this prototype was a way of us helping them gain some of that independence again.


Mark your calendars for the HS Science and Engineering Fair this coming January 23, 2020. ISP will also be hosting the AASCA Science Engineering and Robotics fair in February 12-16. 2020.

About INDICASAT: Our MISSION is to serve as a platform for the scientific and technological progress of Panama. We employ an interdisciplinary model for BASIC and APPLIED scientific approaches to promote health, prevent disease, develop treatments and protect the environment.
http://indicasat.org.pa/home/ Source: INDICASAT