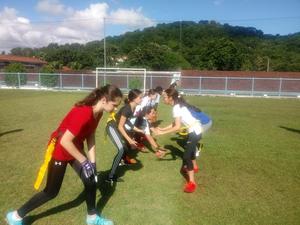 Having opened U15 girls Flag Football in the 2018-2019 school year, this semester has seen further expansion with our first ever U13 Flag Football team formed.

Flag football is a version of American Football, the basic rules of the game are similar to those of the mainstream game. Instead of tackling players to the ground, the defensive team must remove a flag or a flag belt from the ball carrier to end a play and contact is not allowed between players.

The first flag football team in ISP was founded at the Varsity level 7 years ago and this team was created with high expectations. This sport would become one of the most popular sports in the school. We currently have the sub 17, sub 15 and for the first time sub 13.

When we decided to start sub 13 program, we had the vision of preparing a seedbed, forming athletes to improve their skills in and out of the field. Building the Flag Football program from the grassroots is a reflection of what has been successful in building other sports at ISP over the years.

When we did the tryout for sub 13, we were very excited to receive 25 girls, who arrived full of energy and eager to learn this new sport. Now, we are in the middle of the first semester and our coaches have been very impressed with the positive attitude, friendship, commitment and desire to learn displayed by the team. Those are some of the characteristics that stand out in this group. As coaches we are proud because they exceeded our demanding expectations.