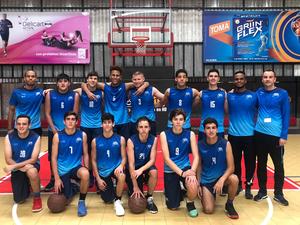 For the first time in history, ISP's Varsity Boys Basketball team competed in the AASCA Championship game and brought back the 2nd place banner to Panama after a heart-breaking 63-61 defeat in the Championship game.
The opening AASCA tournament of the year saw the Dolphins' boys basketball team travel to San Salvador, El Salvador from October 23-27. Having prepared for AASCA this year by playing in the highly competitive Kiwanis league, the Dolphins faced many challenging games locally in the months of September and October and qualified for the quarter-finals of that league three days before departing for AASCA.
ISP faced a demanding schedule with a late start to games on Thursday and two early games on Friday meaning that the Dolphins played four games in a 25 hour period. After group play, ISP faced a Saturday morning semi-final against a well organized Colegio Maya side from Guatemala which we went on to win by 15 points.
The Championship match saw ISP against the local school (Colegio Internacional San Salvador, CISS) who packed the gym with 300 supporters cheering them on. A highly entertaining game saw the lead swing back and forth between both teams. In a tense last quarter, the Dolphins secured a 7 point advantage only to see CISS fight back and sneak the victory by 2 points. To read the FIBA player stats from the tournament you can click on the link here. The ISP delegation of student-athletes, coaches and parents can be proud of their showing in this tournament. With 11 of the 12 players returning next year, this Basketball team has the potential to go one step better next year!
#goispdolphins