Exciting end of semester for the Dolphins! 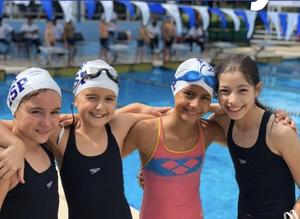 A basketball championship, another AASCA sportsmanship trophy (and more banners) for track and field and a National Swim meet held for Elementary students here on campus encompass some of the recent highlights of ISP Athletics. Read on for more information.
What an incredible end to the semester!
AASCA Track and Field
31 student athletes from grades 6-12 traveled to San Pedro Sula in Honduras for the annual track and field meet from November 20-24. The ISP contingent had been training hard in preparation for this meet, the highlight of the year in the Track calendar in Central America. Many schools were surprised at the end of day 1 to see ISP at the top of the table with the most points in the U19 boys category and this goes to show the development of the track program in recent years. The Dolphins maintained some outstanding performances throughout (in particular in the sprinting events) and out of the 15 participating schools ISP finished in 2nd place with the U14 boys, 3rd place with the U19 boys, 1st place in the Sportsmanship trophy with U19 boys, 4th place with the U14 girls and 10th place with the U19 girls. With record participation levels and record results the future is bright for track and field at ISP!
National Swim meet at ISP
On the weekend of November 23/24 ISP hosted a national swimming competition for students aged 11 and younger. With over 200 swimmers representing 15 schools from all over the country this was a great showcase for swimming in Panama and at ISP. The Dolphin contingent of close to 40 swimmers ended the competition in 2nd place overall with most swimmers beating their personal best times and having fun in the process.
ADECOP League U16 Boys Basketball Champions
Congratulations to the U16 boys basketball team on securing the ADECOP title for the first time since 2016. ISP student Osvaldo H. was awarded as the player with the most points scored in group play and Emanuel C. with the MVP of the Championship game. The Dolphins had a highly successful season with a 2nd place finish at AASCA and reaching the 'final 4' of the highly competitive national KIWANIS league. Congratulations to ISP Boys Basketball Coordinator (and Varsity Head coach) Enrique Grenald on being awarded as KIWANIS 'Coach of the Year' and to ISP Junior Jansey D. on being selected in the 'Dream Team' (top 5) from all teams in KIWANIS league.
Flag Football visitor
On November 22 we had a great time with the visit of Tracey Roberts, player of the national flag football team of Panama, three times world champion and the best linebacker for 6 consecutive years.
The girls had the opportunity to listen to her sports experiences and the importance of teamwork. In addition to that we had an exceptional practice, where we could make many more corrections and we could make a little game, or where all of Tracey's advice was well received.
Copa Talento final 4 again
ISP for the second year running has reached the final 4 of the U12 Girls Copa Talento league. Congratulations to the girls on a the fun and successful season. This is a team comprising of 4th-7th graders and it is impressive to see this diverse team work hard together and support each other on and off the field.
Your feedback matters!
As the semester closes it is an important time for us to reflect on the successes and challenges of the semester and to plan for the future. Parent feedback is an integral part of this. Please take 3 minutes or so to complete the survey below (note there are separate surveys for the ASA and the Athletics programs):